I could not believe these kinds of wonder books still exist in our world!

The Book of Secrets

112 Keys to Unlock the Mystery Within

In a series of 80 talks on an ancient Tantra text of 112 meditation techniques, the Indian god Shiva offers these 112 methods to his consort, Devi. Osho develops these ancient telegraphic and condensed sutras into the fundamental and now classic work, THE BOOK OF SECRETS and takes the reader through each set of two-line verses and explains what method of meditation they are describing, and how to do it. In alternating chapters, he responds to specific question on each techniques. Throughout, Osho encourages the reader to experiment with the techniques in a scientific way, based on experience and experimentation rather than belief or superstition.

THE BOOK OF SECRETS is a tremendous resource for anyone interested in experimenting with meditation. It is much more than just a commentary on an ancient tantra – rather, it is profound and inspired discussion of many different facets of human consciousness, their functions in daily life, and how these 112 techniques may help to bring more awareness and sensitivity into all these different aspects.  Osho’s instruction for each of the meditations is clear and easy to follow, and he accompanies each meditation exercise with a discussion of the effects that the meditation produces and the foundational principles on which it is based. Although the meditations themselves come from the Tantric path, Osho draws on a wide variety of spiritual traditions (Taoism, Buddhism, Christianity, Sufism, and Zen, among others) in the process of making this ancient text easily accessible to the modern reader. 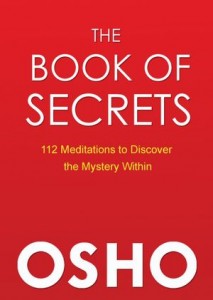 THE BOOK OF SECRETS was, in fact, the first Osho title to be published by international publishing houses around the world in many languages. Originally it was published as a series of five volumes, and it proved difficult for many of the publishers to keep all the volumes in print simultaneously. In the mid 1990s, St. Martin’s Press in New York was the first publisher to take the bold step of publishing this huge collection in one volume. It has proved to be a remarkable success, and the book continues to sell in strong, steady numbers year after year.

Topics covered in the book include: devices to transcend dreaming; secrets of love and liberation; going beyond karma; liberating yourself from yourself; cosmic orgasm through Tantra; sudden enlightenment and its obstacles; acceptance of the peaks and valleys.

The book is also perhaps a first in acknowledging the woman’s status as an independent inquirer. Deva, or Parvati, the consort of Shiva, asks him some of the most quintessential questions for unraveling the secrets of how meditation can bring about a complete mutation in human consciousness. Sex being the strongest desire there is, Shiva explains how the way of Tantra helps in understanding this desire and transcending it. Osho’s insight is: “Tantra says, be aware of the desire; do not create any fight. Move into desire with full consciousness, and when you move into desire with full consciousness you transcend it.”

In the Book of Secrets, Osho has provided an in-depth understanding of the differences between sex and Tantra, Tantra and Yoga, the views about sex in the East and the West, the male and female polarity and how both can become mutually nourishing. The core message is that sex is essentially a mystery, a creative energy manifested in the entire universe. Tantra is helpful in the understanding of this energy and showing how to live a healthy and natural life with love and awareness.

Life is a miracle. If you have not known its mystery, that only shows that you do not know the technique for how to approach it.” –Osho