OSHO: It’s All About Change 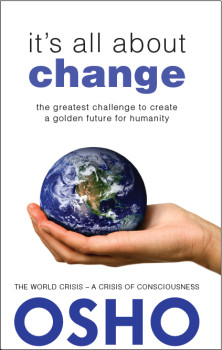 lived.” – Osho.  Everyone, regardless of nationality, religion, or political beliefs, has a sense of the current crisis of planet Earth. The environmental movement has support around the globe, while politicians — lagging behind reality — are still fighting over whether global warming exists. Decision makers in government and in the private sector are dealing with the symptoms of this crisis, rather than addressing the underlying causes in a positive and constructive way.

Osho points out that the current world crisis is a crisis of consciousness. Until there is a radical change in human consciousness, the interrelated social, political, economic, and ecological crises we face will continue. Osho’s radical vision of change addresses how we can turn the present crisis into an opportunity, and what we must do in order to steer our course toward a “golden future” for all humankind and away from what he calls a “global suicide.”

Topics addressed in the book include the crisis of human values, the ecological crisis, the population challenge, the bankruptcy of the very concept of nations and religions, and the paths toward a creative science, meaningful education, and universal human rights.

This entry was posted in Books, eBooks, Osho, OSHO Books. Bookmark the permalink.