RECORD LICENSING AND SALES OF OSHO BOOKS IN 2013 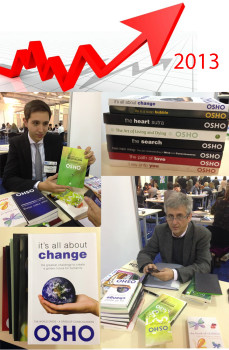 Record Licensing Numbers for OSHO in 2013

After the final overview of the year 2013 has been completed, Osho International Foundation looks back onto a record breaking year with 398 signed publishing agreements for the last year, more than one license for every day of the year, an absolute record, remarkable in times which are often seen as difficult for publishers in a dramatically changing landscape in the international publishing world.

The 2014 London Book Fair in April gave an opportunity to meet with many of Osho International’s publishers and literary agents and many of them, from multiple countries and languages, shared with Osho International that sales of books by Osho were in a strong upward trend – in some languages with sales increases of 30% and more. During 2013 licenses in 40 different languages have been signed and works of Osho are now available in 60 languages around the globe with more than 200 publishing houses. Works by Osho are for example published by 13 Spanish publishing houses, some with large imprints and some carrying only a few specific titles fitting into their programs.

Peter Lisovsky from VES Publishing House, St. Petersburg, Russia, publishing books by Osho for more than a decade, shared the development and positive sales results of his 136 Osho titles under contract and in print. Peter and Nadya Lisapova, VES’ editor for all OSHO projects talked about how the market for Osho titles is growing in the Russian language, including increasing sales in the USA and Israel, where substantial Russian reader numbers justify increasing exports. With a  creative process of new editions, books in different sizes, formats, and price categories, VES keeps these books moving and filing large shelves in Russian book stores.

“It becomes increasingly apparent that Osho’s books have a miraculous influence in Russia, inspiring people to make profound changes in their own lives and attitudes.” — Peter Lisovsky, Publisher, VES PUBLISHING HOUSE

The more than 30 meetings during the London fair are turning already into many new licenses. Most publishers expressed their interest to increase the number of Osho titles in their programs. Osho’s books are long term sellers and have record re-print editions.

For us here at Osho International it is simply fascinating to see how almost 25 years after Osho’s departure his books, videos, and audios are in higher demand and more popular and more available than ever during his lifetime. Today these books meet a more and more understanding readership and audiences, as he had predicted. OSHO Author Page at Amazon.com.

This entry was posted in Books, Media Press, Osho. Bookmark the permalink.