German TZ newspaper prominently presented today Oliver Kahn, one of the most successful German players in recent history and his FC Bayern colleague as fans of Osho. 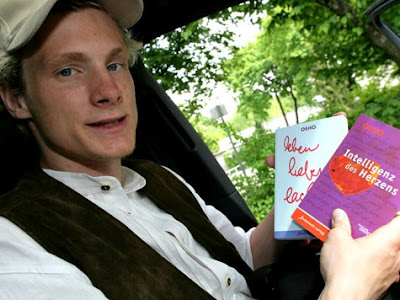 © Leiprecht. FC-Bayern-Spieler Marcell Jansen shows two Osho books by Edition OSHO which he bring to the training camp for the European Football Championship in Mallorca.

Palma de Mallorca – The mountain hike begins. On Monday the team of the German National Football Association (DFB) left for Mallorca in preparation for the European Football Championship. In addition to the players, the coach team and a supervisor on board: many suitcases with tracksuits, towels, shoes and more.

“Well, so much we don’t need to carry,”laughed the Bavaria-Star, as he brings his small bag for the European Championship to the appointment with TZ. His idea: “Let’s take photos in my car – because our fans are all coming by car to Austria and Switzerland.” This is what Jansen has packed in his own EM bag:

Books: Two copies Jansen has in his bag. ‘Intelligence of the Heart’ and ‘Life, Love, Laughter’ of the Indian Osho. “With this I find calm,” said Jansen. The tip for these books came from a colleague: “Olli Kahn has recommended them to me. They are from his favorite author.” 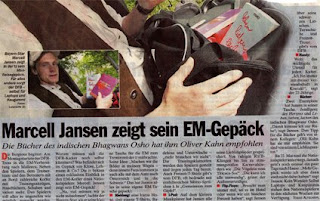