NEW BOOKS FOR A NEW WORLD 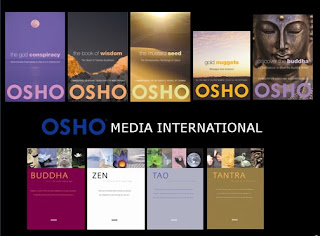 New York/ London: After several years of preparation a new international publishing imprint ‘OSHO MEDIA INTERNATONAL’ will start releasing books by Osho into the international English book market. Osho International has recently entered into a worldwide distribution agreement with Publisher Group Worldwide, a distribution unit of the Perseus Publishing Group in the US to distribute our award winning books, worldwide in the English language..
The first series of five titles will be released in the spring of 2009 and can be ordered throughout the world. The OSHO Times and the OSHO International Newsletter will give regular updates about these development including individual book releases.

David Alexander, the publisher of this new imprint who first published books by Osho in 1993 under the Element Imprint in the UK, expressed his excitement about the upcoming launch date of the new imprint. “I’ve been reading Osho for many years and now we will be able to bring these jewels to a wider market place than ever. Once again Osho has an international imprint for his work which does not depend on personal likings or disliking of a editor at a publishing house. We can now release books by Osho which many publishing houses rejected for many years as “too controversial” and make them now available directly to a worldwide audience.”

The list will become what is called in publishing, a ‘back-list’, bringing back into print Osho’s beautiful classic works, many of them which have been out of print for some time and some which have just been translated from Hindi and will be available for the first time in English.

The new list will have to compete for shelf space in book stores in a tough book market, but Osho has now become an international bestselling author with books in 54 languages, and the expanding market for English books will bring these books to an ever increasing number of people interested in Osho and his proposal.
This publishing program is as a long term project, feeding not only the book market in English speaking countries, but also distributing to non-English speaking countries where people like to read Osho in the original English.
The lead title of the first series

THE GOD CONSPIRACY, exposes, as a first step, the history-old conspiracy of the politician and the priest against joy, pleasure, comfort and luxury. The politician would touch the feet of the priest and the priest enforced a certain kind of society on people – all in the name of god.
Osho points out that the discussion about believe or disbelieve in god is a dead end in itself. Not believing, but experiencing is a way of finding truth and meaning. While Friedrich Nietzsche’s declaration that “God is Dead, therefore man is free” has been an incredible step in understanding – it is in itself a negative solution and has not brought freedom. Simply removing God is not enough to achieve freedom. The atheistic philosophy of Communism has shown the endless abyss of meaninglessness – a vacuum that will be again and again filled with false meaning.
Osho offers something which Nietzsche was unaware of – meditation – a direct connection with existence itself. Zen and meditation allows one to find meaning and significance, creativity, receptivity and a path to freedom. Zen has no god, but it is a tremendous science to transform our consciousness, to bring so much awareness that it is impossible to commit evil. But it is not imposed through commandments; it comes rather from our innermost being and understanding.

THE BOOK OF WISDOM, GOLD NUGGETS AND THE MUSTARD SEED are other jewels in the first series of releases in early of 2009. A new edition of the Buddha Deck DISCOVER THE BUDDHA is a gift item with Osho’s beautiful transformation of Buddha’s wisdom into modern times.

One Response to NEW BOOKS FOR A NEW WORLD