OSHO: The Path of Love

Understanding that Nothing is Perfect in Life 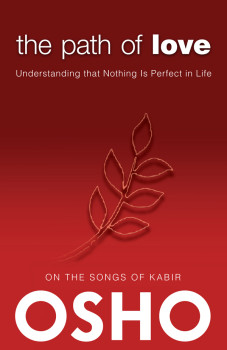 Kabir is a 15th-century Indian mystic. Born a lower-caste weaver, Kabir opposed superstition, empty ritualism and bigotry. His teachings include scathing attacks against Brahmanical pride, caste prejudice and the very concept of untouchability, as well as exposing the dogmatism and bigotry he perceived around him. Unusually, even for his time, he was embraced by disciples who had been raised in both Hindu and Muslim traditions, who saw in him the embodiment of a life-affirmative approach that transcended the narrow dogmas that divide people and set them against one another.

Here, Osho introduces readers to this extraordinary mystic and his songs, bringing both to light in such a way as to show how they are both timeless and utterly relevant to our time. The path of love as described by Osho, and though the songs of Kabir, is a journey that seeks out and celebrates the divine that is hidden in the ordinary, the love that becomes not just a feeling one has, but ultimately a state of being that one is.